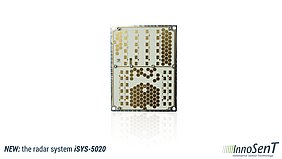 The product series has been developed especially for security technology manufacturers and as a complement to video surveillance. The interaction of the two security technologies contributes to increasing the reliability of area surveillance. While radar technology detects anonymously and in an individually configurable detection area, the CCTV system additionally provides high-resolution images.

False alarms are reduced to a minimum and the surveillance of, for example, large-scale industrial sites, hazard areas and outdoor areas is optimised. Another advantage is that the very robust radar technology provides information independent of the weather, thus compensating, for example, for clouded images in poor lighting conditions using the information provided by the radar system. Using data on distance, movement, speed and the differentiation between static and moving objects, detections can be easily categorised.

With the implementation of configurable danger zones, the iSYS-5020 offers an additional advantage over camera systems: The target history is very valuable for assessing the security situation. Early detection of risk situations for large-scale area surveillance allows critical time gains in order to initiate further security measures. The radar system iSYS-5020 has the same impressive features as the iSYS-5010 and adds further possible uses for video and radar technology.

At the Security trade fair in Essen, InnoSenT GmbH will be presenting its new product to the public for the first time at its trade fair booth (Hall 4, Booth 4A38). From 25/09 to 28/09/2018, you can talk to the radar experts on site about radar in the field of security technology. Further information on innovative radar technology can be found on InnoSenT GmbH’s company homepage.

Publication only with acknowledgement of source and consent of InnoSenT GmbH. For printable images or more information about this topic feel free to contact the InnoSenT Company.

InnoSenT GmbH from Donnersdorf was founded in 1999 and is one of the world's leading companies in the field of radar technology. As a manufacturer and developer, the company supplies the full bandwidth of engineering services - from customer-specific development to series production. Thanks to the strong focus on quality and innovation, InnoSenT GmbH has been following a course to global success for many years.

More information can be found at www.InnoSenT.de